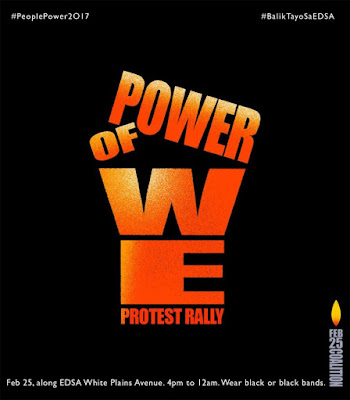 This month we celebrate the People Power Revolution of February 1986, the event that finally put an end to the Marcos dictatorship.

This extraordinary event capped our long years of suffering and struggle. For the regime of Ferdinand Marcos violated our people with torture and imprisonment, displacement and impoverishment, in numbers that have moved even international courts to pass judgment. It was a regime that crushed dissent, even as it plundered the economy, leaving the country with a debt so huge, the next generations will still be making its payments.

Three million people took to the streets in February 1986 to tell that regime they’ve had enough. Millions more gathered in other parts of the country demanding an end to the abusive rule. The people prevailed.

It was an extraordinary time of heroism and resolve, when Filipinos, united in heart and purpose, stopped tanks, converted hardened soldiers, ousted a dictator, and gave democracy a new breath of life.

This year, 2017, People Power has become even more relevant. The Marcos family, which to this day is propped up by stolen wealth, has resurrected itself in politics, setting its sights on nothing less than the biggest prize, Malacañang.

Its expensive and relentless campaign to overturn historical truth and erase the horror of martial law–of which the burial of its patriarch, the dictator Ferdinand, at a cemetery for heroes is an integral part— indicate a clear and present danger.

The institutions of modern democracy that we built in the years since 1986 are young, weak, and vulnerable to a resurgent and aggressive despotism.

Clearly, the tools of dictatorship are being resurrected–from the open threat to suspend the privilege of writ of habeas corpus to the constant danger of having martial law declared, to the subversion of civilian and democratic rule, to the gross violation of human rights.

Already, over 7,000 men, women, and children have lost their lives in killings patently without regard for their fundamental rights as citizens.

These events are akin to the brutalities under the Marcos dictatorship.

We now face the resurgence of nothing less than authoritarian rule.

The February 25 Coalition calls on all citizens to commemorate the 31st anniversary of People Power in the Philippines by remembering that we, the people, are the true sovereign in our Republic.

We challenge the nation to remember our dark history under the dictatorship and to commit to the cause of protecting our hard-won freedoms.

We call upon all citizens to assert our sovereign will and resist all efforts to subvert civilian democratic rule and to revive dictatorship in new forms.

We call on our government to respect the basic rights guaranteed by our Constitution, and to uphold the value of every individual life.

We call on People Power to rise again. Whatever our differences, all Filipinos are united in desiring respect for human rights, justice, peace, prosperity, and our prideful place in the world of nations. Let us fight for our rights, for historical truth, and justice. Let us defend democracy as the only road to peace and progress.

We cannot allow dictatorship to happen ever again in our country.