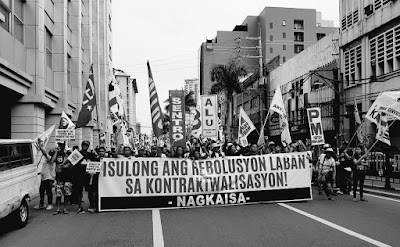 The Sentro ng mga Nagkakaisa at Progresibong Manggagawa (SENTRO) today marched from Welcome Rotonda to Mendiola, passing through Morayta to join other sectors who were in solidarity with the workers. In a statement, SENTRO said it marks the 153rd birth anniversary of Gat Andres Bonifacio, “founding predecessor of the Philippine mass movement and First President of the Philippine Republic by memorializing the heroic struggle of Bonifacio and the Katipunan in these trying times.” It added that SENTRO “looks back to our history of consistent action, and takes heart from it in continuing to carry the torch of seeking and advocating for economic and political justice for all.”

Josua Mata, Secretary-General of SENTRO, stated that six months into the presidency of Rodrigo Roa Duterte, the Philippines is now in a seething state of tension, division and political polarization. “For all his bluster, bravado and posturing in promising change since the May 2016 elections, he has only succeeded in worsening the social, economic and political gap between the privileged and the excluded in Philippine society,” added Mata.

The “war on drugs” Duterte has sanctioned continues to prove itself as a “war on the poor”—with 5,617 casualties. With a police hierarchy under PNP Chief Ronaldo “Bato” dela Rosa wholly subservient to the whims of the President, our police institutions, constitutionally-mandated to protect and serve the public from crime and violence, now glories in its role as the President’s praetorian guard of butchers and hatchet-men.

Mata stated that “the Duterte regime, proving its promise of standing up against the elites of Philippine society as full of hot air, has also visibly backtracked on its promise to dismantle the ‘endo’ system of contractualization in favor of the working peoples (both in the manufacturing and service sectors).” That the Labor Secretary, Silvestre Bello III, continues to vacillate between the just demands of the working peoples’ movements and the rapacious threats of the employers and capitalists, poses massive questions to whether this issue will actually be resolved in the name of social justice, the statement continued.

According to the 80,000-strong labor center, Duterte’s partisanship to the forces of oppression has finally surfaced by fully sanctioning the burial of the tyrant Ferdinand Marcos in the Libingan ng mga Bayani last November 18, 2016—immediately 10 days after the craven decision of the Supreme Court to declare the absence of legal impediment to the burial, and without giving time to filing motions of consideration against the decision. “That this burial was done clandestinely, away from the eyes of the public and without any transparency whatsoever simply affirms once over that the heirs of the dictator Marcos has no intention of standing accountable for their two-decade ransacking of the Philippine state and society. The state-apparatuses are scrambling to continue justifying the actions of their clearly-beholden president—to the extent of inflaming the ire and resentment of the new generations of our youth.”

“The Filipino people are already waking up to the monumental costs of their choice in the polls,” according to SENTRO. “That mobilizations and indignation protests continue to be mounted by the millennial generation of today against the burial of the tyrant Marcos show that the administration is beginning to wear its welcome.” It says that even the President’s supporters are now beginning to be split in their condoning of the “war on drugs” suggests that this platform is unravelling without a clear end-goal in mind. “That a growing number of our population are now finding the perorations and propagandizing of the Duterte camp’s online “trolls” and unofficial spokespersons (all of dubious character and non-existent integrity) is a heartening sign that reason and basic decency have not yet left Philippine public discourse,” added Mata.

“That people are now finally choosing to stand up against the excesses of the Duterte regime after months of silence and patience simply mean one thing: They now know that their President is neither a father, nor a leader, nor a saviour. They now know he is a tyrant and a bully who cements his throne in blood and skulls. And we know from history how tyrants end their stories.”

Finally, SENTRO called on the Filipino people to remain vigilant and insistent on their social, economic and political rights.

“We call on the Philippine government to stand accountable for the growing number of dead and injured in their war on the poor. We call to a halt on political prosecution of opposition actors who are simply doing their job of protecting the Filipino people’s basic human rights. We continuously call for the exhumation of Marcos from his undeserved burial in the Libingan ng mga Bayani. We also call on the Marcos family and their partisans to finally come clean, stop the propagandizing, and finally own up to and pay up for their countless crimes against the Filipino people. We continue to assert that the Duterte administration must abandon authoritarianism and finally think on behalf of all Filipino peoples—not just his intransigent, intolerant and oppressive patrons. Lest he reaps the wind.”