I would like to draw your attention to a vigil that is taking place outside the Philippines Embassy tomorrow (Friday) at 4pm. The vigil is in support of the farmers who were shot dead by the police in Kidapawan, Cotabato last weekend, and calling for an independent inquiry into the killings. The farmers were protesting the lack of food following a drought caused by El Nino. The authorities were supposed to provide relief funds, rice and seeds over the last 5 months but had not done so despite some relief money being in their coffers. The parallels with Colombia are astonishing as the authorities try to justify their actions by saying the banned New People’s Army were behind the protests. Militarisation of Mindanao is increasing as mining and agribusiness interests push people off the land and cause untold misery and land ‘cleansing’ as indigenous groups, including the Lumads, are hounded and displaced.

UNISON’s sister union in the Philippines, PIPSEA, also voiced concerns about the brutality of the response.

The Campaign for Human Rights in the Philippines UK (CHRP) has issued details about tomorrow’s action.

UNISON is supporting the vigil as many of our members in public services have family and friends in the Philippines: people who rely on remittances from Filipino workers in this country who are themselves facing hardships as the UK government threatens deportation for those earning less than £35k pa. 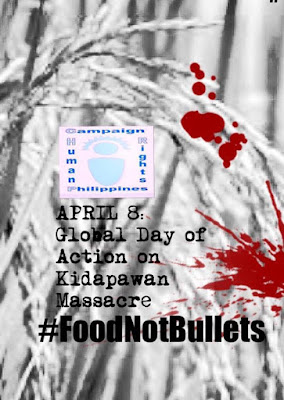