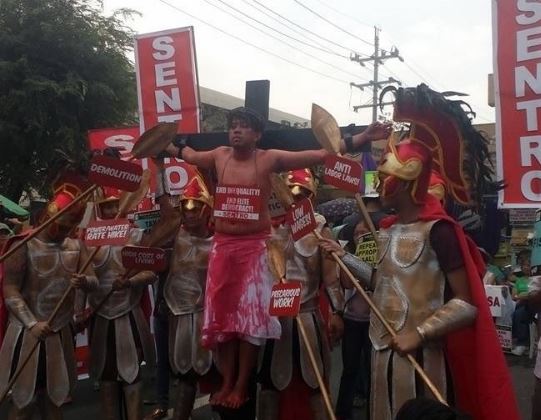 THE PASSION of Jesus Christ is not merely a tale from a bygone time because it is still happening among the majority poor and oppressed people.

This was reiterated by members of the national labor center Sentro ng mga Nagkakaisa at Progresibong Manggagawa as they staged today their annual "people's Passion play" in observance of the Lenten season, which portrays or reenacts the many "crosses" of most Filipinos that weigh them down.

One Sentro member acted as "Kristong Manggagawa" or Christ the Worker, who is being crucified or persecuted by a socioeconomic structure where a few gets richer and rules the overwhelming majority that remains poor or becomes poorer.

During the program in Mendiola, the actors playing the Roman soldiers stabbed "Christ" with their spears that symbolized the various issues and problems plaguing the common citizens.

The protesters dared the national and local candidates and party-list groups in the upcoming May elections to "decisively break" the "Roman spears" that represent and perpetuate poverty and many other forms of injustice.

In Mendiola, Sentro members also linked up with other allied organizations, led by the Freedom from Debt Coalition (FDC), which earlier conducted an activist interpretation or a "people's contemporary version" of the "Pabasa" or "Pasyon" (Pabasa ng Pasyon or "Reading of the Passion"), which is based on a 16th-century epic poem introduced by Spanish friars and adapted by the early Filipinos. It narrates the life, suffering, death and resurrection of Christ and recited by devotees through nonstop chanting in different Philippine dialects during Holy Week.