Aquino no longer deserves any support from workers and trade unions 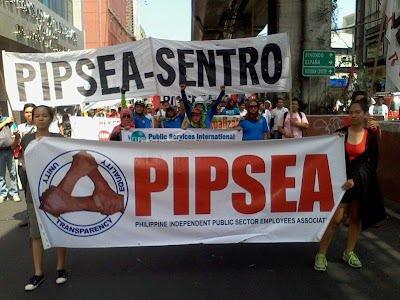 THE workers and the trade unions throughout the world mark today the International Labor Day – 125th anniversary globally and 112th celebration here in the Philippines. This historic and revered day has been an enduring and stirring symbol for the working class despite serious setbacks caused by multipronged and systematic neoliberal attacks against the workers, the masses and their organizations, which have seriously threatened to dilute if not totally wipe out the hard-fought sociopolitical gains achieved by the labor movement in the past hundred years or so.

Our observance of May Day this year coincides with the Aquino government’s remaining one year in office highlighted by its legacies of an illusion of prosperity; selective anti-corruption drive; lackluster support if not outright rejection of many progressive proposals like the FOI (freedom of information) bill, deprivatization of public utilities, fast-tracking agrarian reform program, refusing neoliberal economic programs being imposed by multilateral institutions, among others; consenting to US interference in the country’s internal security policy; and rebuffing the trade unions and the civil society.

Mass poverty is deteriorating despite the overhyped economic “growths” or successive GDP (gross domestic product) increases since Benigno Aquino III assumed the presidency in 2010. Ironically, the only thing constant in wealth issue here is that the majority poor are becoming poorer while the few rich are getting richer – the top 20-percent richest Filipinos own and control almost 50% percent (and counting) of the country’s wealth. What Aquino has attained is clearly not an inclusive growth as the GDP hikes are primarily translated into bigger profits for the country’s top corporations and increased assets for a handful of wealthy families every year.

FURTHER demonstrating this sham growth, the national economy has been unable to create sufficient, secure and decent jobs. Much of the employments claimed by the government in 2014 only are of poor quality. Hence, about 90 percent or 918,000 of the 1.02 million additional jobs last year were merely part-time work or those who worked for less than 40 hours. Still included here are self-employed workers (407,000) and those who worked without pay or unpaid family workers (292,000). No wonder millions of Filipinos seek better jobs and pays abroad despite the risks; thus, there would be many other Mary Jane Velosos to emerge.

The acclaims for Aquino’s so-called “tuwid na daan” anticorruption campaign and “reform agenda” will come to naught because of his stubborn loyalty to and tolerance of corrupt and incompetent subordinates. His efforts will be reduced to nothing but a “grand double standard show.”

What Aquino is saying is increasingly becoming contradictory to what he is actually doing. For instance, while declaring “war” against corruption and other anomalies, he miserably failed to actively back the passage of the FOI bill – it could have greatly assisted in prosecuting or even preventing graft and corruption – which has been languishing for years in Congress. Likewise, he kept on parroting the worn out “free market” mantra in rejecting government intervention in inept public utility firms run by private companies (MRT-LRT, for example), which, for their bungling services, wanted the consumers to pay more! As expected, he has been abiding by the key neoliberal economic programs dictated by the likes of the World Trade Organization (WTO). And remember the land distribution under the agrarian reform program? Decades after it was launched by his mother in the late ’80s and a little one year left in his term, tens of thousands of hectares of lands are yet to be given to beneficiaries.

The Mamasapano incident has exposed the very obvious direct role of and cover-up attempts by Aquino in this tragedy, which resulted to the tragic and needless deaths of dozens of police troopers, Moro fighters and innocent civilians. It also utterly disregarded all the ceasefire mechanisms with the MILF and thus gravely jeopardizing the hard earned peace process. In fact, it enabled rightwing hawks and demagogues to fan the flames of Islamophobia and knee-jerk call to arms, and to demand the scrapping of the proposed Bangsamoro Basic Law (BBL). Finally, it confirmed – although still downplayed – the undue influence or even unconstitutional engagements of the US on our foreign policy and internal security policy.

MOREOVER, SENTRO and its allied organizations in the labor movement, especially the NAGKAISA labor coalition, have through the years been dismayed by Aquino’s penchant to easily rebuff, if not show contempt for, our key labor, trade union and social demands.

From the very outset, Aquino practically ridiculed the SOT (security of tenure) bill in Congress, which could have significantly arrested the worsening contractualization that in turn perpetrates precarious work, cheap wages, measly benefits, and rampant violations of a long list of labor and trade union rights. He even claimed – and copied the wild theory devoid of empirical data – that 10 million workers would lose their jobs if the SOT bill is enacted into law! As a result, the predominantly pro-capitalist and pro-Aquino legislators have sat on the bill and thus it remains pending.

Unlike Aquino’s absurd theory on SOT, there is a study – ironically by the IMF or the International Monetary Fund no less – with empirical data to boot, which links rising inequality to the declining trade union membership. Falling number of union members is one of the principal effects of the absence of security of tenure since only regular workers (not contractuals) are allowed to join unions. The research’s (“Power from the People,” Finance and Development, March 2015, Vol. 52, No. 1) apparently simple but highly logical explanation is that with less union members, less workers are covered by CBAs (collective bargaining agreements). With less CBA coverage, fewer workers enjoy the benefits of supposed economic growth resulting to greater inequality. Likewise, fewer workers benefiting from this growth means fewer workers are effectively participating in the economy, which ultimately means a weaker economy.

THEREFORE, by persistently repudiating the SOT bill – as well as other pro-worker and pro-union policies – Aquino has actually exacerbated the inequality in the country!

Aquino has also openly reneged on his promise – during the elections and upon occupying Malacañang – that he would regularly sit down with labor representatives to prove that his “tuwid na daan” governance truly addresses the issues and concerns of the workers. In particular, Aquino vowed that there would be at least one labor-government meeting every quarter of each year. As it turned out, Aquino’s “dialogue” with labor leaders in April 2014 (preceded by a May 2012 meeting) was only their third and last meeting – with just a little over a year left in his term!

This could have likely prompted the eventual failure of labor’s key legislative and social demands to be certified as urgent measures by Malacañang and Congress: the SOT and FOI bills (as already cited); reasonable not almost worthless wage increases; substantial tax breaks for minimum wage earners; lowering the costs of electricity, transportation fares and other basic services and commodities; firm resolve to end the rising extrajudicial killings (EJKs), especially of trade union and social activists, journalists, etc.

ON THIS HALLOWED DAY for all workers and the organized labor, SENTRO, together with the NAGKAISA, will reassert our final break with the government of Aquino for his dismal record on promoting and protecting labor and trade union rights, and for turning his back on us by breaking his promises to us during his presidential campaign and early into his term when he needed us most. The workers and other basic sectors of society and their organizations hereby end any cooperation to his administration.

Let us take control again of the streets of Manila, Lipa, Cebu, Davao, Cagayan de Oro, General Santos, Cotabato and elsewhere to project working class unity and reaffirm our commitment to the historic mission of the working class to build a better world.