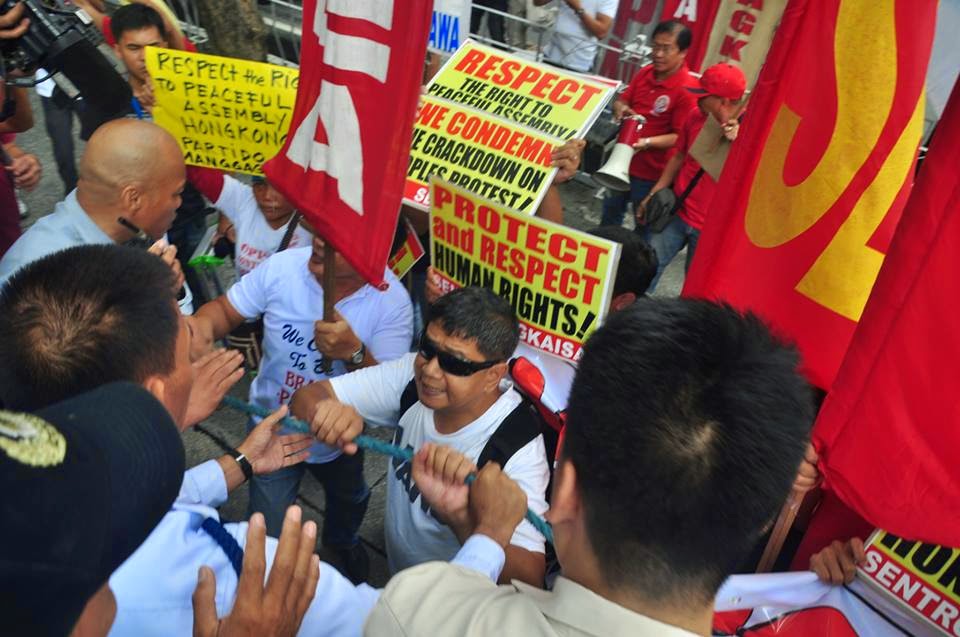 NAGKAISA members rallied today in front of the Chinese embassy’s consular section in Makati City to air their support to the general strike of Hong Kong’s trade unions and the week-old massive pro-democracy protests rocking this prosperous semiautonomous city of China.

Part of the worldwide network backing the Hong Kong pro-democracy movement, the NAGKAISA leaders blasted China for its “dogmatic refusal” to respect the Hong Kong citizens’ right to universal suffrage or the right to vote and be voted, as well as its role in the violent attempt to disperse the protesters last Sunday.

Rally leaders said that the uncalled-for police assault using tear gas and pepper spray against a peaceful protest, where at least 59 were injured and 89 arrested, has in fact backfired on the authorities as it prompted more people to join the demonstrations – initially led by the Hong Kong Federation of Students – who now swelled to tens of thousands under the banner of the broad Occupy Central movement.

The Sept. 28 dispersal also prodded the Hong Kong Confederation of Trade Unions (HKCTU) to call for a general strike on Oct. 1 coinciding with the 65th founding anniversary of the People’s Republic of China.

Heeding HKCTU’s call were trade union members from the ranks of teachers, dockers, beverage employees and from other industries as this Hong Kong’s largest labor center stated that “to defend democracy and justice, (the workers) cannot let the students fight the suppression alone.”

NAGKAISA also lauded HKCTU as actually the “backbone of the multisectoral democracy movement in Hong Kong” even before the former British colonial ruler handed Hong Kong back to China in 1997.

NAGKAISA activists handed the consular office a letter* urging the Chinese and Hong Kong authorities “to respect the right of the Hong Kong protesters to peaceably assemble and to raise their grievances and democratic demands, and to refrain from resorting to violent and other retaliatory measures.”

They also warned that “ruthless repression à la Tiananmen Square in 1989 will have tremendous global repercussions to China and will no longer be tolerated and ignored by the international community.”

Included in the letter was the demand of the Hong Kong protesters for Leung Chun-ying to step down as the city’s chief executive “for his dismal leadership and for his role in the violent suppression of dissent and prodemocracy protests.”

The protesters revealed that part of the deal in the 1997 handover was that Hong Kong citizens would be allowed to vote for their leader – called chief executive – in 2017; but China’s government reneged on its promise when it declared last August that only those vetted by Beijing would be allowed to become “candidates” in the election.

“It would be another form of a sham ‘election’ like the current system where the chief executive is ‘elected’ by a 1,200-person ‘committee’ filled with Beijing sycophants and lackeys, thus, both are downright undemocratic and elitist,” NAGKAISA said in its letter.

NAGKAISA reiterated that universal suffrage and other basic democratic rights are not incompatible with an autonomous or Special Administrative Region (SAR) setup like in Hong Kong.

“They will even bolster the ‘one country, two systems’ model for the post-British Hong Kong that China supposedly adheres to, and will eventually benefit Hong Kong and mainland China, as well as the rest of the world,” NAGKAISA leaders declared.

Dear Mr. Ambassador:
We represent the general membership and leadership of NAGKAISA, the broadest labor coalition comprising 80% of all the organized workers in the country.

We are one with the people of Hong Kong and the Hong Kong Confederation of Trade Unions (HKCTU), Hong Kong’s top independent trade union center even before the territory’s handover from the UK to China.

Mr. Ambassador, allow us to freely express NAGKAISA’s utmost concern in the current social upheavals in Hong Kong, China’s foremost special administrative area. We respectfully urge the Chinese government as well as the Hong Kong authorities to respect the right of the protesters – who include our colleagues from the HKCTU and other Hong Kong-based NGOs – to peaceably assemble and to raise their grievances and democratic demands.

We condemn the violent measures taken by the Hong Kong Authority in its attempt to break the protest last Sunday. Using brute force against unarmed and peaceful protesters will have tremendous repercussions to Hong Kong – and China – and definitely will not be tolerated and ignored by the international community.

In particular, NAGKAISA wishes to present the following demands to the Chinese government and the Hong Kong administrators, through the Embassy of China here in Manila:

(1) End to the crackdown against peaceful assemblies and protest actions.
(2) Immediately release all arrested protesters and guarantee their basic human rights.
(3) Implement universal suffrage or the right to vote of Hong Kong citizens, including fielding and selecting their own chosen candidates in the election for Hong Kong leaders.
(4) Resignation of Chief Executive CY Leung for him to take responsibility for the violent and uncalled-for dispersal of student activists and other protesters last Sept. 28.
In the spirit of free and responsible exchange of even opposing ideas, thank you for giving us this opportunity.