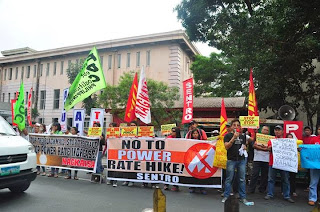 While politicians and businessmen have joined President Aquino for the National Day of Prayer and Solidarity to the victims of natural and man-made calamities, workers in Metro Manila belonging to the labor coalition Nagkaisa, trooped to the Supreme Court to seek relief and ultimate deliverance from unjust power rate hikes.

The fifteen (15) justices, also known as 'The gods of Faura', were set to hear oral arguments tomorrow on several petitions seeking injunctions to Meralco's P4.15/kWh rate increase. Prime in the agenda to resolve are questions on whether or not the Energy Regulatory Commission (ERC) committed grave abuse of discretion in approving Meralco rate hike; whether or not automatic rate adjustment is valid; and whether or not the generation sector is not a public utility and therefore beyond regulation by ERC, among others.

"We pray that the justices deliver us from a decade-old fraud and industry blackmail," said Nagkaisa in a statement released during their picket at the gates of the Supreme Court building. The group was referring to frauds committed under the Electric Power Industry Reform Act (EPIRA), including the latest allegations on collusion and market abuse among power firms and the latter's threat of rotating blackouts had they fail to collect rate increases.

Nagkaisa asserted that since the enactment of EPIRA which led to the deregulation of the generation of generation sector, privatization of Napocor assets, the creation of spot market, and the introduction of performance-based regulation, fraud became the norm in the power industry as shown by rising prices and cartelization.

"It is no secret that owners of power firms, the so-called Voltage 5 (Aboitiz, Lopez, San Miguel, Henry Sy, and Pangilinan) have been earning record high profits from record high tariffs of their power-related firms," said Nagkaisa.

The labor coalition recalled that lowering the cost of power was the pledge of the Arroyo administration when it prodded Congress to pass the EPIRA upon assumption to power 13 years ago today.

Nagkaisa explained further that since 2008, many of its convenor groups have attended, submitted position papers, and argued against the ills of EPIRA before committee hearings of both houses of Congress, including those conducted by the powerful Joint Congressional Power Committee (JCPC). Yet no actions were made to address those concerns.

It likewise chided the Executive for peddling the line that the only choice for now is between expensive power, or having no power at all.