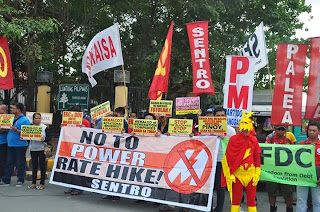 WITH the committee on energy resuming its probe on the spike in Meralco rate today, the labor coalition Nagkaisa, pressed the Senate as a whole to declare the Electric Power Industry Reform Act (EPIRA) a failure and consider crafting a new policy framework for sustainable energy and energy democracy.
The group, which held another picket outside the Senate building, said that unless there is a declaration to that effect, public hearings and investigations will offer no material relief to consumers.
Nagkaisa explained that since 2008, consumer groups have attended, submitted position papers, and argued against the ills of EPIRA before committee hearings of both houses of Congress, including those conducted by the powerful Joint Congressional Power Committee (JCPC). Yet no actions were made to address those concerns.
"Public hearings end with another scheduled hearing then nothing happens until another controversy arises. Workers are really tired of wishy-washy intervention on a social problem of this scale," Nagkaisa said, referring to the crises of escalating power rates and diminishing supply.
Nagkaisa asserted that since the enactment of EPIRA which led to the deregulation of the generation of generation sector, privatization of Napocor assets, creation of the spot market, and the introduction of performance-based regulation.  Fraud became the norm in the power industry as shown by rising prices and cartelization.
The group reminded the Senate that in 2008, Senator Miriam Santiago who chaired the JCPC then stated in her opening remarks in one of JCPC's public hearings that EPIRA is a failure; the Senate is a failure as well as the Executive.
"That is seven years ago and the people will not accept another decade of unrewarding probes to a mess that has been there since day one of the implementation of EPIRA," said the group.
Nagkaisa has been protesting the power hikes which they believed were caused by flawed policies under EPIRA.
Electric Power Industry Reform Act (EPIRA) Energy Regulatory Commission (ERC) Nagkaisa! News Power Rate Hike Power to the People Coalition Wholesale Electricity Spot Market (WESM)