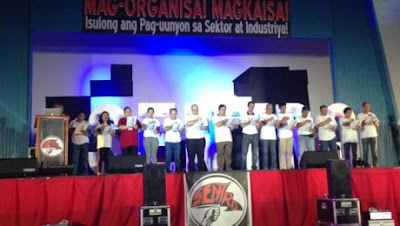 SENTRO or Sentro ng mga Nagkakaisa at Progresibong Manggagawa was formally established when it held its founding congress last week, August 30-31. Representing at least 80,000 members in the private, public and informal sectors, including migrant workers, women and the youth, SENTRO is committed to take social movement unionism (SMU) to new heights by intensifying the organizing of industry and sectoral unions in the country.

“SENTRO is our humble and sincere contribution to the overall initiative to help unify or strengthen the Philippine labor movement,” Frank Mero, founding chairperson of SENTRO, declared in front of over 2,000 trade unionists and activists that packed the Ateneo High School Gym during the “public session” or the second day of the congress. Mero also chairs the Philippine Metalworkers’ Alliance (PMA).

“It is the culmination of years of painstaking efforts of the Alliance of Progressive Labor (APL), the Labor Education and Research Network (LEARN) and their allied organizations to bring together 13 trade union organizations (mostly industry federations) and three sectoral groupings – informal sector, migrant workers, youth,” Daniel Edralin, SENTRO vice chair for the private sector workers, noted. Edralin is also the APL chair.

Josua Mata, SENTRO’s founding secretary general, explained that the congress’ theme of “Mag-organisa! Magkaisa! Isulong ang Pag-uunyon sa Sektor at Industriya!” is a “call to intensify SMU in the country by merging unions along industry and sectoral lines, and to fight back the devastating effects of global neoliberal programs against the workers and their trade unions and other mass organizations,” and adding that “this is a significant break from the past where the emphasis is on forming similar and squabbling general federations.”

“Through the formation of industry and sectoral unions, we can significantly reduce, if not eliminate, one of the biggest sources of disunity among workers – union raiding,” Felix Cabuguas Jr., SENTRO vice chair for the public sector workers, said. Cabuguas is also the national president of the Philippine Independent Public Sector Employees Association (PIPSEA).


The founding members of SENTRO include unions in the automotive, metal and metal-related industries, hotels, hospitals, beverages, broadcasting, banks, electric power, and some others in the manufacturing sector. Its member unions in the public sector include those in the local government units (LGUs), postal service and some national government agencies. SENTRO also includes one of the country’s biggest federations of transport workers, a national confederation of informal settlers, a migrant workers’ group in Hong Kong, and a youth organization.

“SENTRO is committed to fight for regular and decent jobs, an expanded ‘social wage’ – including public housing – and the recognition of labor and trade union rights for all workers in the public and private, formal and informal sectors,” Fatima Cabanag, SENTRO vice chair for the informal sector workers, stated. She added that “through our community-based organizing, we are even able to bring into the fold of unionism the unemployed and home-based workers.” Cabanag is also the chair of the Kapisanan ng mga Maralitang Obrero (KAMAO), a federation of urban poor associations.

SENTRO also vowed to help strengthen international workers’ solidarity, as it decided in one of its resolutions to affiliate to the International Trade Union Confederation (ITUC), the biggest global labor center with more than 300 member federations representing about 174 million workers in almost 160 countries and territories. SENTRO also encourages its affiliates to align themselves with global union federations appropriate to their respective industries or sectors. The GUFs that some SENTRO members are currently affiliated to are the IUF, IndustriALL, ITF, PSI, and UNI.

(IUF is the International Union of Food, Agricultural, Hotel, Restaurant, Catering, Tobacco and Allied Workers’ Associations; IndustriALL is in mining, energy and manufacturing industries; ITF is the International Transportworkers’ Federation; PSI is the Public Services International; and UNI is the Union Network International, which is primarily for workers in the services, media and communications sector.)

Coinciding with the 150th birth anniversary this year of Andres Bonifacio, SENTRO likewise decided to actively campaign for his recognition as the first president of the country. “Apart from correcting history, Bonifacio’s recognition as the First President would also remind us that the working class, through its revolutionary movement, actually governed the country at one point in our history,” Mata said.

“This is an inspiring reminder for today’s working class that they have the ability and responsibility to (govern) again as the elites have repeatedly proven that they are incapable of governing without plundering the country,” the SENTRO secgen added.

Atty. Gary Bonifacio, the great-great grandson of Bonifacio’s brother Procopio, graced the SENTRO congress with his presence. Guests from the local and international trade union movement who were present and delivered solidarity messages to the congress were Noriyuki Suzuki of the ITUC-Asia/Pacific; Hidayat Greenfield, acting regional secretary of the IUF-A/P; Elizabeth Tang, coordinator of the IDWN (International Domestic Workers’ Network); Diis Bøhn and Floro Francisco of the LO-Norway (Norwegian Confederation of Trade Unions).

One of the 11 resolutions submitted to and approved in the congress was SENTRO’s call on the government to abolish the “corrupt and corrupting” pork barrel and all “pork-like” funds like the huge and highly discretionary special purpose funds of both President Aquino and Vice President Binay. To demonstrate its resolve to continue the fight against “pork,” SENTRO held a 45-minute noise barrage along Katipunan Ave. right after its congress inside Ateneo de Manila University.