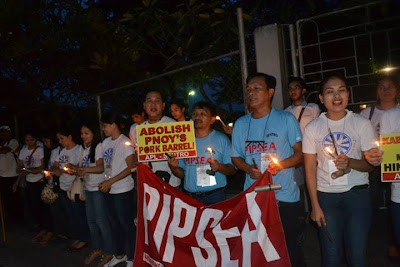 Under the new banner SENTRO, thousands of workers is holding a noise barrage this afternoon along Katipunan Ave., outside Ateneo de Manila University, to press for the scrapping of the pork barrel system. Amid widespread suspicions over Malacañang’s ‘special treatment’ of the queen of pork barrel scam, Janet Lim-Napoles, SENTRO is also calling for an independent investigation of all PDAF funds as well as ‘pork-like funds’ of President Benigno Simeon Aquino III and Vice President Jejomar Binay.

Considered as part of a series of campaigns against the pork barrel, which was highlighted by the “Million People March” last Monday, the protesters in Katipunan assailed the alleged “doublespeak” of the Aquino government in its sudden decision to “abolish” PDAF only two days before the huge rally in Manila.

“We don’t think this administration or its agencies alone could ensure a thorough and transparent investigation of the pork barrel scam,” Frank Mero, chairman of the newly established labor center SENTRO, said.

“Ferreting out the truth and exacting accountability from all those involved in this multibillion racket, including those closely allied to the Aquino administration, is too important to be left alone in the hands of P-Noy and his spin masters,” Mero added.

SENTRO is proposing a multisectoral “citizens’ audit” that would include representatives from genuine and reputable people’s organizations (POs) and nongovernment (NGOs) – not the spurious types that were involved in the scam – that would work hand in hand with the Commission on Audit (COA).

This body should be provided with sufficient powers and resources to thoroughly examine PDAF not only during the Arroyo regime but also up to the last PDAF allocations this year or next year – as Budget Secretary Florencio Abad admitted that the P25.2-billion PDAF in the planned P2.3-trillion national budget in 2014 will stay – and to help prosecute all culprits in the scam.
The “citizens’ audit” would likewise check the multibillion-peso pork-like and “highly discretionary” funds both of Aquino and Binay.

“We want to see Napoles in jail, but we also want all those who connived with her to share her cell,” Josua Mata, SENTRO Secretary General, said. He added that “the people want to see a trial that will not drag on for years but will quickly convict her and all her accomplices, including big-time politicians, and for them to fully serve their prison terms and not to be hastily pardoned like what happened in the past.”

SENTRO or the Sentro ng mga Nagkakaisa at Progresibong Manggagawa, composed of 16 industry and sectoral unions representing at least 80,000 members nationwide, held its founding congress on Aug. 30-31, where the delegates adopted a resolution explicitly demanding the “abolition not only of PDAF but all ‘pork-like’ discretionary funds in the legislative and executive branches of government.”
News Pork Barrel Sentro ng mga Nagkakaisa at Progresibong Manggagawa (SENTRO)